Possible Arsenal Starting XI next season including the new faces Sanchez and Debuchy. With the players who are out now.

Although Arsene Wenger was busy on the beaches of Brazil during the World Cup, it seemed that his board room staff at the Emirates were given orders by the Arsenal boss to remain on duty. What could be defined as a bolt from the blue, Arsenal have a fairly busy summer transfer period as they are still looking to add more firepower. Although their transfer spending’s are less than what their neighbors Chelsea have done or what Liverpool have achieved since the start of this transfer window, still it is a welcome sign for the Gunners who have been urging their board to be on-board with rival clubs when it comes to transfers.

Players In:
With the timely departure of Bacary Sagna after the Frenchman failed to agree on terms regarding the expansion of his contract, Arsenal have signed a like to like replacement as another Frenchman in Mathieu Debuchy fills the void created by his predecessor’s departure.

One more and what has been the only marquee signing by Arsene Wenger, Alexis Sanchez has been signed by the London club from Barcelona. In a deal that has seen Arsenal squash their transfer record 2nd time in a matter of two seasons, the 30million pound man from Chile looks all set to add firepower among the Arsenal ranks.

One more player likely to return to the Arsenal ranks is Joel Campbell as the Costa Rican forward looks set to reap the benefits of his loan spell outside of Emirates. After an impressive World Cup campaign that saw him scoring 1 and assisting 1 in 5 matches, there are many reasons why the Arsenal faithful are looking for his return.

Players out:
While Bacary Sagna chose Manchester City over Arsenal as his former employers chose not to budge too much regarding contractual terms, the Frenchman is the only player who has left the north London side this summer. 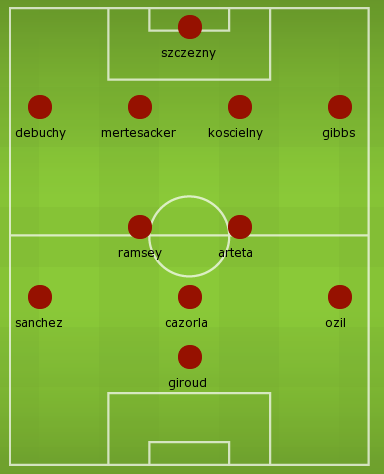 Likely changes:
One position that is likely to be in constant change is the attacking right position where the Chilean Sanchez is on hold. If Walcott makes a timely comeback and shows glimpse of his previous performances, than it is likely that Sanchez will come in center and Walcott will play out wide.