Real Madrid have completed another great signing of James Rodriguez from Moncao for £63million and are set to offload Isco for the right price. 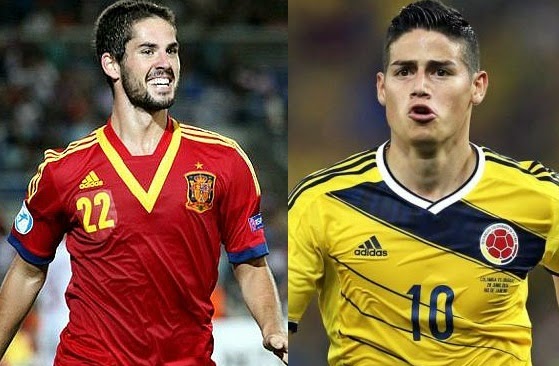 Despite of having a quality player like Isco, Real Madrid still signed the World Cup Golden Boot winner.

Isco failed to prove the way Rodriguez did in the World Cup due to lack of time on the pitch especially for Spain, it is always difficult to get much time at such age.

While the Colombian make the most of his chance and proved his worth at the World Cup by scoring a goal in every game. The 23-year-old scored 6 goals in 5 games and won the Golden Boot.

Both the players have a similar playing style as they are central attacking midfielder but can also be used on the sides.

Below is the comparison.

Reference: Whoscored.com
Apart from the World Cup, both have been superb for their respective teams last term, Isco started less games as compared to Rodriguez but scored more goals than the Colombian while quality wise Rodriguez has more positive points than Isco.

For me, Isco can easily fight Rodriguez if Real Madrid give him a chance in the coming season.

Vote on the basis of club performance.