After a season of winning the closest Premier League title in years, Manuel Pellegrini will be hoping his team will not rest on laurels this season. Having seen arsenal what happened to his predecessor Roberto Mancini when he failed to win a title after a Premier League winning season, the Chilean has taken all the necessary steps to avoid the repetition of history.


After the signing of Willy Caballero from his former side Malaga, Manchester City boss made sure any dump of form from the English goalkeeper Joe Hart will not be met with a rookie. At 32 years of age, playing 38 games in his last season and with 12 of them as clean sheets, the Argentinian will be more than a threat to the current Man City number 1.

Bacary Sagna has been another recent addition in the light blue color of Manchester City. After failing to agree personal terms with Arsenal, the Frenchman followed the example of Samir Nasri as he signed for Manchester City albeit on a free transfer. His transfer has been downplayed by many due to his transfer fee however as the stats mentioned below suggests, he could become a super sub for the Manchester City side.

One more signing that City were hoping since the dawn of last season was Fernando. When City signed him for £15million, they knew they were signing a gem, a heavy tackler in the Brazilian. When Manchester City was unsure of how Yaya Toure will fare keeping his recent maneuvers against City, the Brazilian Fernando could play in exactly the same role as that of Ivorian. However since now the Ivorian has committed his future at the Etihad, it is more than likely that the Brazilian will be on the bench and can prove to be a super sub. 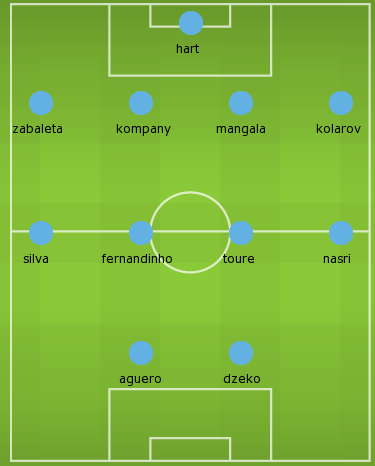