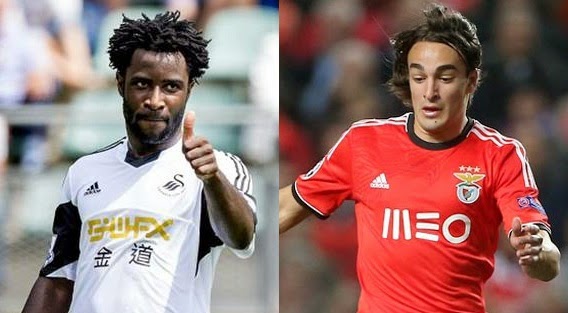 Liverpool who have confirmed that their star man Luis Suarez is set to finalize his move to Barcelona next week are looking to spend the money they will receive from Barcelona on the right player.

Liverpool boss Rodgers is a big admirer of Bony and wants to land him for the right price reportedly around £20million. The 25-year-old scored 25 goals in 48 appearances for Swansea last season.

Arsenal were also interested in his services but looks now they are keeping close tabs on Loic Remy but Liverpool will still have to fight another London side Tottenham Hotspurs who are ready to offer £18million for Bony.

While Liverpool are close in signing Lazar Markovic from Portuguese side Benfica for around £20million. The 20-year-old was spotted in Portugal airport earlier today which gives a hint for a Liverpool move.

The Serbian scored 6 goals in 26 appearances for Benfica last season.

Reports have also linked Arda Turan to Liverpool once again. The La Liga winner is a Liverpool fan and will hopefully never deny an opportunity to play for the Reds.