How will Real Madrid lineup next season?

How will Real Madrid lineup in 2014-2015 season? With new signings James Rodriguez, Tony Kroos and Ronaldo, Isco how will they play now.

When the Middle Eastern Giants took over the French Football a couple of years ago, it was thought that the real dominance of the Spanish duo Real Madrid and Barcelona was under severe question. However as it turned out to be last summer which is followed by this summer signings, both Real Madrid and Barcelona have shown their financial muscle twice in a matter of as many years.


After signing the then PFA player of the year award winner last season in Gareth Bale, the world stood still to welcome the World 2nd expensive signing at the Santiago Bernabeu. After scoring 83 goals in the 2008-09 season, the Real Madrid side haven’t looked back as they have become the first side in LA LIGA history to score more than 100 goals in five consecutive seasons.

Real Madrid are the first side in LA LIGA side to score 100+ goals in 5 successive seasons.

However the above mentioned facts could be distracting as the Real Madrid side have won just 1 league title in last five seasons. Certainly this looks daunting for a side that always attack as a thunder but at the same time, whose defense disappears as a smoke when it matters.

Turning our attention back to this season, Real Madrid have again shown what they are capable off. By signing the best player of this World Cup in James Rodriguez for 63million pounds, Real Madrid have eclipsed the transfer activity that surrounded Barcelona when they signed Luis Suarez. In addition the fee being paid for the Colombian International, once again the fact has become clear that keeping the money talks ahead the Spanish giants are still the focal points of top players.

In last four seasons, both Cristiano Ronaldo and Lionel Messi have been the top scorers in Europe top five leagues simultaneously.

In a team that is glittered with the presence of Ronaldo, Bale, Benzema and adding to that throne a costly Colombian jewel in James Rodriguez, it has become clear once again that Fiorentino Perez and Carlo Ancelloti are one of the biggest admirers of World Cup stars. From having Filipe Inzaghi at Juventus to having Drogba at Chelsea and now with a Frenchman Benzema hitting the ground hard for the Italian, the 4 time Champions League winner is always blessed when it comes to star players.

Team News:
With James Rodriguez in the squad and Angel di Maria probably making way for him by moving to French Champions Paris Saints Germain, it is expected that he will play in the central attacking midfield role for the ten times Champions League winners. While Angel Di Maria was the top assist recorder last season in the position which was left empty by Mesut Ozil departure, it is expected now that the Welshman Gareth Bale will play on that left wing role.

Having scored 252 goals in 246 appearances for the Spanish side, a model is required to be adapted by Ancelloti to favor the Portuguese. Although severe questions were raised on his role following Bale’s arrival last season, the Portuguese has shown once again he can flourish in a team that has more than 1 World beaters in it.

When Toni Kroos arrived in the ranks of Madrid for a fee reported in the region of 21 million pounds, it was certainly meant to be the end of Sami Khedira’s spell at the Santiago Bernabeu. And now with the former Liverpool International Xabi Alonso reaching the climax of his career, Modric and Kroos are expected to be the wall in front of the four defenders for Real Madrid. 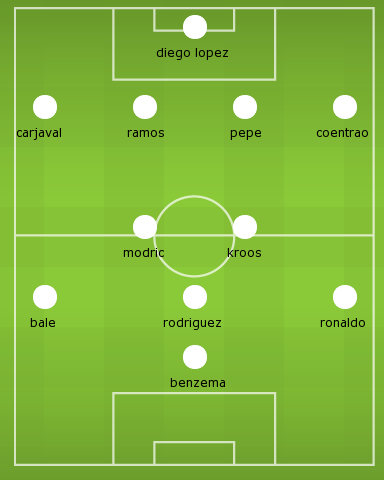