Barcelona lineup for 2014-2105 season with new signings Rackitic, Suarez from Liverpool, and Barca World Cup hero Neymar and Messi see how will they play together.

With a season to forget behind them and certainly going into a new era, an era which will not be dictated by Xavi but that will be constructed by Rackitic and Busquets in the midfield. By announcing Luis Enrique the man to lead them, Barcelona has made it clear very much even before the start of this season that even though they adore the 2008-12 era of Pep Guardiola, they will not rue upon their history and certainly the signings made by them have made sense.

When they ask who can replace Ronaldo and Messi, a South American in Luis Suarez comes to mind. Although the bite gate in Brazil has helped tremendously Barcelona to avoid a tug of war battle between them and the reigning European Champions Real Madrid for the signature of Suarez, it hasn’t actually helped them to lower the fee.

One disadvantage of being rich in the football world is that people know you have the money. As the French football was taken by frenzy by the Middle Eastern owners 2 seasons ago, it was thought that a Guardiola-less-Barcelona might have to suffer. At a time where Real Madrid are going to add into their ranks, Barcelona have to suffer the inevitable task of re-grouping.

While Puyol announced his retirement last season, the pass maestro in Xavi is now also seeking greener pastures. So in addition to fill the void that has been created in the midfield, defense has become a sort of concern for the Catalan giants.

While Real Madrid have scored a century of goals last season, Barcelona might have left betrayed as it was their prodigy. By signing Neymar last season they tried to avoid over-relying on Messi however as the 1st season turned out to be the South American, he was thought to be living in the shadow of Messi rather than creating his own path. Now with the signature of a rebel in Luis Suarez, Barcelona have a front three that could attack like thunder.

The trinity of Suarez, Neymar and Messi have scored a combined 68 goals for their sides last season. 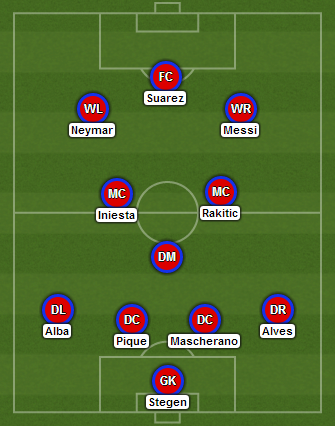