Possible Lineups: Spain vs Netherlands: Today Spain will face Netherlands in the third game of the World Cup 2014 at Arena Fonte Nova.

Today Spain will face Netherlands in the third game of the World Cup 2014 at Arena Fonte Nova.


Four years ago, Spain won the final against Netherlands and this year it seems a little bit difference in both sides as they are not enough strong like they were in 2010. Spain still have the top squad but are not the favourites to win this World Cup.

Robin Van Persie, Wesley Sneijder and Arjen Robben all will start this game, these were the players who appeared in the 2010 World Cup final. While Spanish players David Villa, Iniesta, Cesc Fabregas, Xavi, Fernando Torres and Iker Casillas all were the part of that final and majority of them will be starting today.

Spain are eyeing to become the third ever country to win two consecutive World Cups in the history of football. 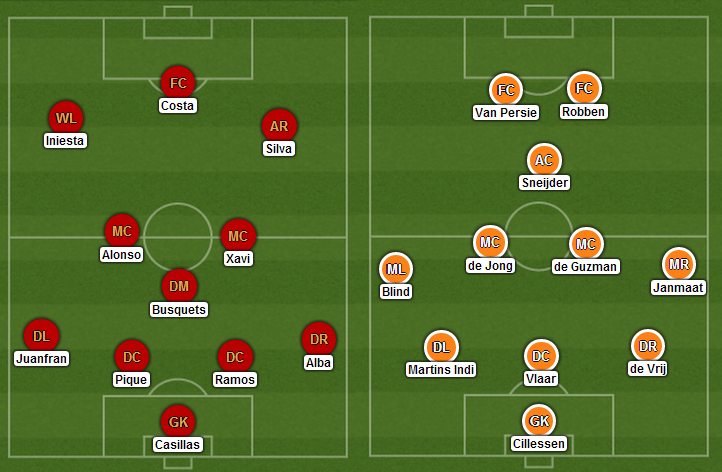 Players to watch:
Iniesta: Spanish maestro who might be playing his last World Cup is the key player to watch. The 30-year-old playmaker who scored the winner in 2010 final is set to inspire everyone through his passing and dribbling skills.

Robin van Persie: For Netherlands, van Persie is the player to watch, The striker scored 18 goals for Manchester United last season. He has been an important part for his national side for the past 4-5 years. RVP has the ability to fight for the golden boot.

Prediction:
Spain 1-1 Netherlands
I will go for a draw. Spain will score in the first half and Netherlands will equalize it in the second.