Possible Lineups: Netherlands vs Mexico Today, Estadio Castelao will once again become one of the exiting place as Netherlands will play Mexico there in the third game of round of 16.

Today, Estadio Castelao will once again become one of the exciting place as Netherlands will play Mexico there in the third game of round of 16.

For Netherlands it might be an easy match, but this World Cup has given so much new drama to watch and Mexico are not a team that can be beaten easily.


TEAM NEWS:
Netherlands will once again start with Manchester United striker Robin van Persie, who missed the last game against Chile due to suspension.

Meanwhile for Mexico, they have no injury worries. The only problem is of José Juan Vázquez who is set to miss this game due to suspension while Carlos Salcido is ready to play inplace of Vázquez. 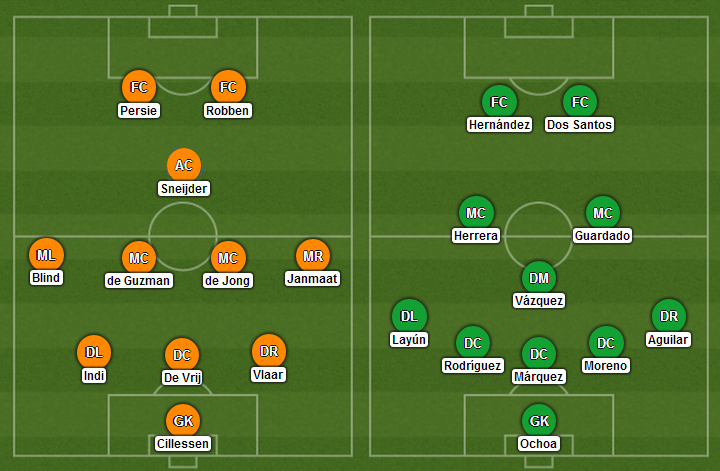 KEY MAN TO WATCH:
Robin van Persie (Netherlands)
Netherlands striker Robin van Persie is surely a man to watch in this game. He has scored 3 goals in only 2 games so far in this competition. He missed the last game against Chile due a suspension. Watch out for him, he will fight for the Golden boot.