Italy will meet Costa Rica in their second game of the World Cup today at Arena Pernambuco.

The winner of this game will secure their place in the knockout stages while a draw will not going to confirm anyone’s place in the next round.

On the other hand Uruguay won 2-0 against England yesterday, thanks to Luis Suarez for the two goals.

Team News:
Italy skipper Gianluigi Buffon has returned from an injury and will start the game. The 36-year-old missed the last game against England with an ankle injury. While full-back Mattia De Sciglio is still a doubt for this clash.

Meanwhile Costa Rica are without any injury concerns and will probably start with the same squad with Joel Campbell in front of goal. 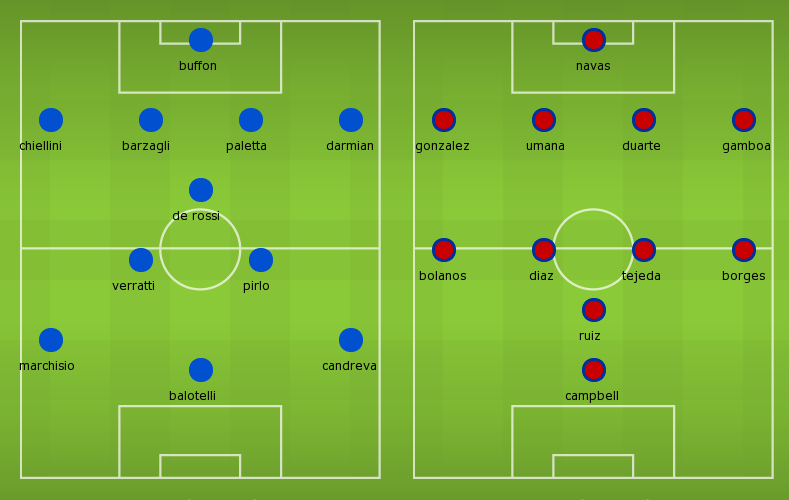 Head to Head:
Italy and Costa Rica will face for the second time, the last and the only time they met were in a friendly game in 1994 which ended in favour of Italy.
Italy 1 - 0 Costa Rica (11th June 1994, Friendly)

Player to Watch:
Italy: Andrea Pirlo
Andrea Pirlo, the heart of Italy's midfield played vital part in their first win against England. Pirlo's driving passes through the midfield cause problems for the opponent’s defence with giant Mario Balotelli in front of goal. The 35-year-old will surely do his magic.

Prediction:
Italy 3 - 1 Costa Rica
Italy has an upper hand in this game and will surely beat them but a surprise from Costa Rica can come like they surprised everyone against Uruguay.