Arsenal star Olivier Giorud will once again line up with Real Madrid striker Karim Benza upfront for France today in an early game against Nigeria at Estadio Nacional.

Both the sides have not met in the World Cup before, it will be their first meeting and France are the favourites to win this game.

Stat: France are unbeaten in this tournament.

TEAM NEWS:
France midfielder Yohan Cabaye has returned from his suspension and will probably be in the starting eleven.

While for Nigeria, Victor Moses is back in training after suffering a little knock while midfielder Michael Babatunde will be unavailable due to a broken wrist. 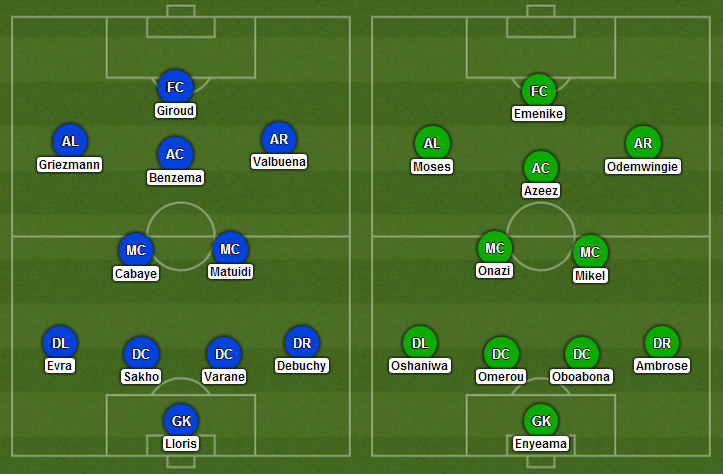 KEY MAN TO WATCH:
Karim Benzema (France)
Benzema is the key man to watch. He has scored three goals in three games so far in this competition. Benzema will pair up with Giroud who has a goal to his name in this World Cup.
“Karim Benzema has scored nine goals in his last nine appearances for France"

HEAD TO HEAD:
They have faced each other only once in the past, it was a friendly game in 2009, which was won by Nigeria by one goal to nil.

PREDICTION:
France 2 – 1 Nigeria, it will be an exciting match and Benzema will hopefully score again.