Possible Lineups: Colombia vs Uruguay Today another two teams from South America will face head to head for the 39th time. The match will be played on 21:00 BST at Estadio Maracana.

Today another two teams from South America will go head to head for the 39th time. The match will be played on 21:00 BST at Estadio Maracana.


Colombia are exciting this year even without their star player Radamel Falcao. All eyes are on James Rodriguez who has been sensational since the first game of the World Cup.
While Uruguay will be playing without Luis Suarez, Edinson Cavani will have to play a vital role in front of goals.

Stat: Colombia have won 11 games out of last 38 games against Uruguay.

TEAM NEWS:
For Colombia, Mario Yepes is a doubt for the game due to hamstring injury.

Uruguay star player Luis Suarez has been banned from nine international games due to his incident against Italy so he won’t be featuring for Uruguay. Diego Forlan would likely to partnership once again with Edinson Cavani in the absence of Suarez. 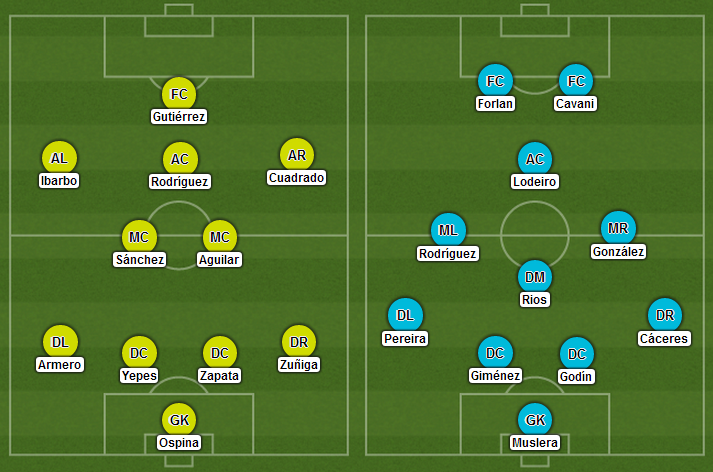 KEY MAN TO WATCH:
James Rodriguez (Colombia)
Rodriguez is the key man to watch, he is been exceptional in this World Cup and an exciting player to watch. He has scored in every game and looks set to continue his streak.