Injured World Cup IX: Following is the lineup who are not the part of their internationals sides due to their injuries.

We all know that there are many players who will not be playing this summer’s World Cup due to the injuries and here we have selected the best line up, everyone will miss majority of them in this tournament. 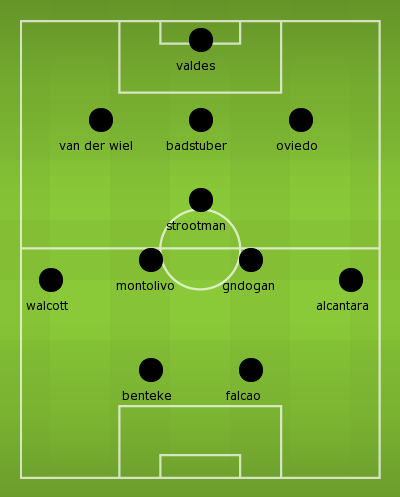 Defenders:
Gregory van der Wiel (Right back, Netherlands and Paris Saint-Germain)
Van der Wiel was the part of last World Cup but this time his knee problem has sidelined him.

Holger Badstuber (Center back, Germany and Bayern Munich)
Badstuber has not played for 18 months due to cruciate ligament but has started training so that he can start next season.

Bryan Oviedo (Left back, Costa Rica and Everton)
Oviedo’s leg was broken in a FA Cup game in January. Currently, the player is back in training but not enough fit to play the World Cup.

Ilkay Gündogan (Center midfielder, Germany and Dortmund)
Gündogan’s back problem has costed his World Cup dreams. Currently, he is hoping to be fit for the next season.

Forwards:
Christian Benteke (Center forward, Belgium and Aston Villa)
The Belgium beast will be missed due to his achilles tendon injury.

Radamel Falcao (Center forward, Colombia and Monaco)
Falcao who is the best player present in this list suffered anterior cruciate ligament in January.

Who will be missed most?
For me Riccardo Montolivo.
Have your say below.