Group D: The Group of Death!!!

Teams: Uruguay, Costa Rica, England and Italy
With Uruguay and Italy watching on intently, a third FIFA World Cup winner was added to the mix in the shape of England, following on from Costa Rica, leaving pre-tournament predictions tough to call. Seven times the names of the European and South American sides have been engraved on the World Cup Trophy, and at least one of these former champions will emerge into the knockout phase with their credentials well tested this time around. 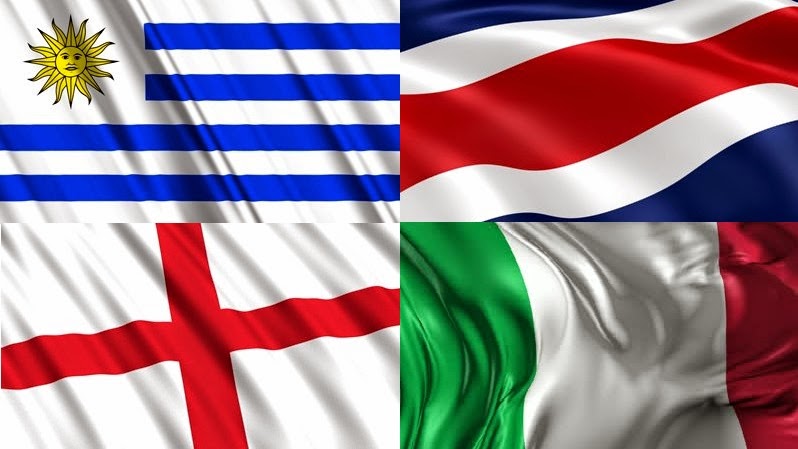 Uruguay
The current Copa America holders did not have a convincing qualifying campaign and were the last team to book their place in Brazil. Oscar Tabarez’s offensive system relies greatly on the abilities of Luis Suarez whose injury will be a cause of concern. Edinson Cavani will look to have a big impact after being reduced to playing second fiddle at PSG under Zlatan Ibrahimovic. Diego Forlan, the star of 2010 will look to make the most in what could be his last major tournament. In a recent international friendly, Uruguay were unconvincing in a 1-0 victory over Northern Ireland. Oscar Tabarez will be hoping his side picks up before their first game against Costa Rica on 14th June.

Costa Rica
The least fancied team in this group, Costa Rica will be keen to show the world what they are capable of. Jorge Luis Pinto will be greatly relying on the likes of Joel Campbell, Bryan Ruiz and Levante keeper, Keylor Navas to cause a major upset in the tournament. Qualifying for the World Cup is an achievement as the side failed to do so in 2010. The side’s strongest point remains their defence after they conceded the least goals in the CONCACAF qualifying campaign. It would be wrong to write them off and Jorge Pinto will be keen to ensure that the world takes notice of his side.

England
Wayne Rooney regards this, the best English side in the last ten years and there is little evidence to argue against it. A perfect blend of youth and experience, Roy Hodgson’s men go into this tournament as one of the favourites. The likes of Sturridge, Barkley, Lallana along with the experienced Wayne Rooney will lead the attacking lineup. Frank Lampard and Steven Gerrard will be keen to win the biggest prize in world football for this could well be their last World Cup. The defence however remains a major cause of concern with Jagielka perhaps being the best man to partner Gary Cahill. It has been 48 years since England last won the coveted prize and the fans back home would be hoping that this is their year.

Italy
The Azzurri never fail to shine in the face of adversity. Be it winning the 2006 FIFA World Cup or finishing as finalists at Euro 2012. With no major problem concerning the side this time around, Cesare Prandelli’s men will be looking to make amends for their dismal performance in 2010. Temperamental striker, Mario Balotelli will once again be the centre of attention. The absence of Giuseppe Rossi could trouble the team along with that of Milan captain, Riccardo Montolivo. Enjoying perhaps the best phase of his career, Andrea Pirlo will be pivotal in the centre of midfield along with the likes of Daniele de Rossi. In spite of leaking four goals in the Euro final against Spain, the Italian defence is still rock solid. The likes of Chiellini, Bonucci and Paletta will be integral to their team’s chances this year.