With only a few days remaining for the most anticipated sports event in the world, I took the pleasure of creating an analysis of the teams from Group A.
Group A: Brazil, Croatia, Mexico and Cameroon 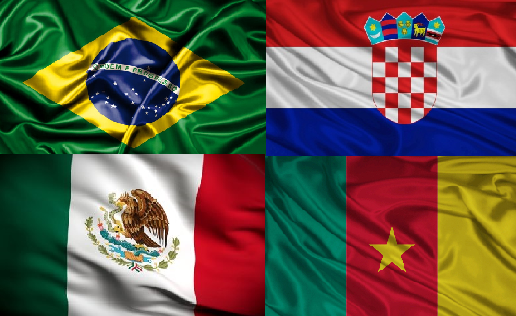 BRAZIL----
Since the hosts did not play in the qualifiers, we have to assess them on the international matches they have played recently. On paper, Brazil is undoubtedly one of the best teams competing for this World Cup. With the likes of Neymar, Oscar and many more elite players there is a huge possibility of the Brazilians winning the trophy a record 6 times, as they also own the advantage of hosting the tournament.

Unfortunately, World Cup has never been predictable and it can go against our expectations as well. Brazil has been vulnerable to long range shots which resulted in Brazil conceding many goals. Fans were a bit unhappy when veterans Ronaldinho and Kaka were left out of the provisional squads.

The draw has been very kind to Brazil, with easy competitors (atleast no heavyweights), so we should expect Brazil to top the group.

The whole nation would be expecting a good campaign for Brazil, as they have produced legends like Pele, Ronaldinho and many more over the years.

Brazil were the World Cup hosts in 1950, where Uruguay emerged champions. Brazil are yet to be one of the host nations to win the World Cup, there are chances that they will turn the tables this year.

CROATIA----
This nation is believed to put up a good fight for the second spot. Croatia has been very dangerous in the six-yard box as 43% of their goals were scored from there. Most of their goals were created from the wings. They are one of the very few teams who did not concede a goal in the final quarter of the hour as that is the time when teams are vulnerable to concede a goal. Nonetheless, Croatia cannot be considered a heavyweight in the World Cup. It would be a difficult job for them to qualify in the next stage as they have Brazil, Mexico and Cameroon in their group. It would be tough for them to breach the Brazilian or the Mexican defense with their wing play. Moreover, they did not score more than two goals in a game in the qualifiers; That’s something to worry about. We have seen Croatia showing us some impressive football. The team has some big names like Luka Modric, Mario Mandzukic and Ivan Rakitic. They should give us a good show and might even progress further in the tournament.

MEXICO----
Mexico were the hosts of the 1970 and 1986 World Cup, featuring the biggest legends football ever produced- Pele and Diego Maradona in the respective years. Mexico are yet to win a World Cup, but they have shown us some great performances over the years. The closest they have got is the quarter-finals in the years 1970 and 1986, as the hosts. Yes, Mexico cannot be considered as the favourites to win this World Cup, but they are expected to progress to the pre-quarter finals.

The team will feature Manchester United forward Javier Hernandez, ‘little pea’ for the fans. With the likes of Robin Van Persie and Wayne Rooney in his club team, he does not get the chance he deserves. He will surely do his best for his national team to secure his position in Manchester United; Moreover, every player would want to lift the World Cup for his country and spread a nation-wide feeling of immense pleasure.

Focusing on the team again, Mexico was pretty impressive in the qualifying stages. It will be a bit difficult for them to qualify from the group stages, but they should be able to make it. Nonetheless, Mexico will be a team to watch out for in the World Cup.

CAMEROON----
Cameroon is one of the dangerous sides from Africa. Founded in 1960, they have shown an immense growth in the world of football, producing talents like Samuel Eto’o and the renowned footballer Roger Milla. Milla still holds the record of “The oldest player to score in a World Cup”. Leading the team in 1990, Milla’s men proved to be a big threat to the other teams. Cameroon lit up the tournament in 1990 winning a tough group containing the Soviet Union, Argentina and Romania, beating Colombia in round two and taking England to extra time before losing 3-2. The team consists of many players who have played for Europe’s top clubs.

But one has to admit that their chances to progress to the pre-quarter finals is bleak. They have had a decent qualifying stage and a good African Nation’s Cup. They will be in the fight for a spot in the pre-quarters and might as well succeed. Cameroon would be hoping to have a decent tournament and progress to the World Cup quarter-finals, for the first time ever.

OVERALL----
Brazil should top their group as they are undoubtedly the strongest team in the group. There will be a good competition for the second spot. On paper, Mexico has the highest chances to come second, but we can never say. Croatia and Nigeria has been showing us some good football and will be up for the challenge. Group A of the FIFA World Cup would be very competitive and a feast to the eyes for football lovers.

Who will be the top two??
Have your say below.