Here are the top five midfielders of past decade.Zidane, Gerrard, Lampard are the with a Brazilan and Spaniard.

This is the second part of the series “top five players”, last time I published top five defenders and now it is about midfielders. Midfield includes all positions wingers, center mid, attacking and defensive.

Many will argue on it that I have not selected big names like Xavi and Paul Scholes, there are many midfielders who deserved to be in this list but here I have chosen those five who I think are best. 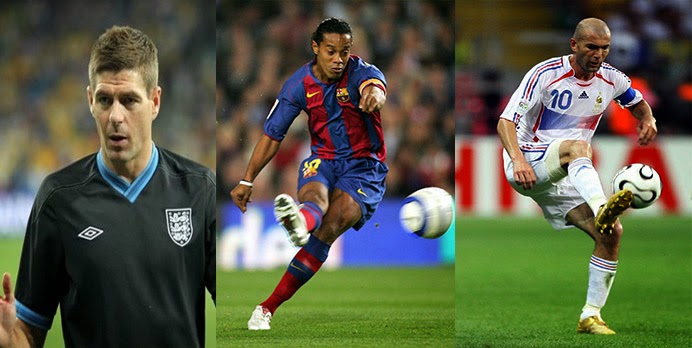 Rankings are based on number of games played, number of trophies won and performance on the field.

Here are the top five midfielders of past decade.


5. Zinedine Zidane (Attacking midfielder)
Euro and World Cup champion Zidane played for four different clubs namely Cannes, Bordeaux, Juventus and Real Madrid. Last two clubs were the most important because he was at his peak that time. Zidane scored 125 goals in 681 matches in his entire career.


4. Ronaldinho (Attacking midfielder)
Many will argue on it that he is not a pure midfielder, because sometimes he used to play as a second striker but his main position was attacking midfielder just behind the striker.
Ronaldinho was not a good player he was exceptional and is considered as one of the greatest players in the history of football. The speedy unstoppable Brazilian played for three big clubs, Paris Saints Germain, Barcelona and AC Milan. Currently playing for Brazilian side Atlético Mneiro. He won Ballon d’Or twice in 2004 and 2005.


3. Steven Gerrard (Center midfielder)
Liverpool and England captain Steven Gerrard has played 656 and scored 169 goals, currently playing his 16th season with Liverpool. The coming World Cup will be his last tournament with England.


2. Andres Iniesta (Attacking midfielder)
The 29-year-old Spaniard is playing his 12th season at Barcelona. He has made 546 appearances for Barca. Iniesta has won everything with them from La Liga to Champions League plus he has also won a World Cup and two Euro with Spain.


1. Frank Lampard (Center midfielder)
On this player many will say that he should not be given the rank one, but I think he deserves this spot. Chelsea all-time top scorer Lampard was signed by Chelsea from West Ham in 2001. The Englishman has scored 210 goals in 639 games for the Blues. Currently playing 13th season with the Blues.

Next article will be on top five forwards, don’t forget to visit.