Top five forwards of last 20 years. All belong to different countries. Rankings are based on number of games played, number of trophies won and performance on the field.

This is a last article of the series top five players of last decades.
Role of forwards is to score as many goals as they can their main focus is always to score, there are many great forwards and here are the five top forwards. One is from Arsenal.
Here I have only discussed big honours with club and country. 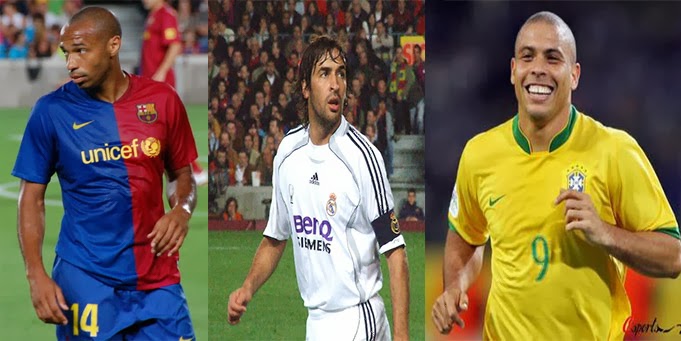 Rankings are based on number of games played, number of trophies won and performance on the field.


5. Filippo Inzaghi
The 40-year-old Italian born player played for many clubs, Juventus and AC Milan are the big names. Milan signed him from Juventus for £17 million. Inzaghi scored 288 goals in 623 games in his entire football career.

4. Andriy Shevchenko
Another Milan player who failed in Premier League with Chelsea, but still his performances with Milan were exceptional. The Ukraine international netted 175 goals in 322 matches during his eight years at the San Siro. For country, he made 111 appearances in which he scored 48 goals.

3. Thierry Henry
With all that skills pace, dribbling, shooting and his clinical finishing Henry took Arsenal to an unbeaten season for the first time in the history of Premier League. Arsenal all time top scorer with 228 played 377 for the Gunners. While for Barcelona he played 121 games and scored 49 goals.

2. Raul Gonzalez
Real Madrid and Champions League all time top scorer Raul spent 16 years at Madrid before leaving for the German side Schalke 04 in 2010. 323 goals in 741 matches in 16 seasons are enough to call him a legend. Currently playing for Qatar side Al Sadd.

1. Ronaldo
The Brazilian who played for four big clubs Inter Milan and AC Milan, Barcelona and Real Madrid. He played 518 and netted 352 goals in his 18 years of career. Ronaldo two goals against Germany in the 2002 World Cup final are unforgettable.