Manchester Derby is always an enjoyable fixture to watch but this time we will see whether it is as good as always or going to be a one sided game.

Manchester United are struggling under new manager David Moyes this season, currently they are on 7th place in the Premier League table while The Blue side of Manchester is going on high scoring lot of goals even against big teams. Lets see what will happen tonight.

Team News:
Manchester United:
United boss Moyes has not revealed any update regarding the injured center backs. Three defenders Rio Ferdinand, Chris Smalling and Jonny Evans all were out in the last game against West Ham United and now reports saying that Moyes has not given any update on these three center backs in the pre match conference.
While winger Antonio Valencia has an eye problem which makes him 50 50 for the game but striker Robin van Persie due to knee injury and captain Nemanja Vidic due to suspension will miss this clash.

Manchester City:
Vincent Kompany has completed his suspension and hopefully he will captain the team and striker Edin Dzeko is doubtful due to illness. Matija Nastasic and Sergio Aguero remain on the sidelines.

Players to watch:
For United there is only one player in form and that’s Wayne Rooney. The Englishman scored an exceptional volley goal from the half line against West Ham last weekend.

And for City there is a long list who can cause troubles, one of them is City’s top scorer Yaya Toure, he is a defensive midfielder and scoring like a striker. He will be the main man for City tonight. 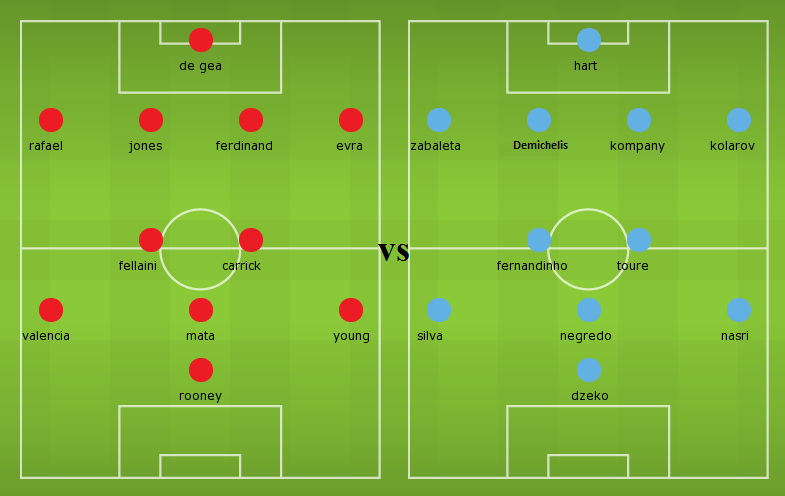