Sir Alex Ferguson: FROM BOTTOM TO TOP AND THE NEW ONE

After 26 years of service at Old Trafford Sir Alex Ferguson has finally decided to retire at the end of the season.

It isn’t a surprise for us that Sir Alex Ferguson (SAF) retires, we all knew that one day he will. So 9th may, 2013 is the memorable day in the history of English football. Seventy-one (71) years old gaffer served united for 26 years. He is the one of the best manager, though I am a Liverpool supporter but I can say that he is the one of the best football manager ever produced in the professional football. He has won 13 of 21 premier league titles, 2 champion’s league and many other cups.
The question is that what will happen to united without him? Because he was the man who started from bottom then took United to the top with fame making good players like Ronaldo. United became famous and the best British club just because of him. The likes of Beckham, Scholes, Butt, Andy Cole, Cantona and many more, all developed under him. United will be having a lot of problems without him, he made a great team including many youngster, developing them from the youth and giving them a chance to play in first team. Chelsea, City spending lot of money on players but still couldn’t get that consistency and stability like United. That was just because of SAF. But this stability and consistency will now be tested with new manager David Moyes. 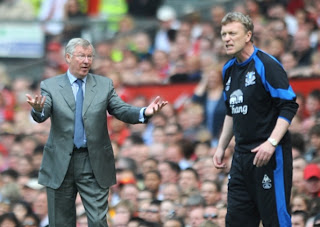 Today David Moyes is now named as the new manager of Manchester United. Many united fans don’t want him as a manager. Moyes is a great and experienced manager and having a great time with Everton. Everton is improving every year in his management. He deserves to manage a big team like United. Moyes record is not virtuous against top 4 teams. Everton has not shown positive results against the traditional "big four", and only managed to pick up just 18 points from 135 in away games.
David Moyes may be a good choice but lets see if he can become the next Sir Alex.